Last Saturday we held a birthday party for Dr. Seuss, who would have been 108 this year. When I went shopping the Friday before, there were about 20 people signed up for the party. Luckily I always get more than I think I’ll need, because Saturday morning a TON more people signed up! In fact, we actually had 71 people, but only about 50 came, to my relief.

The party ended up being exactly an hour, which is what I had planned for, amazingly enough. Some kids came in costume, which was really cute. I wore my striped hat 🙂

I had a bunch of books to read and I wanted to gauge the crowd before choosing. I ended up reading The Cat in the Hat, which many of the kids knew already and so they enjoyed listening to it. Even the younger kids stayed pretty still through the whole book. I didn’t attempt another one and we went right into our craft, Thing 1 & Thing 2 paper bag puppets. Finding a good craft proved more difficult than I thought, even with lots of searching and scouring Pinterest. I finally found something relatively easy from a great blog called The obSEUSSed Home Librarian. The kids and parents liked making them. Most only made one, but some ambitious parents made both.

When they finished their craft, we sang happy birthday to Dr. Seuss and cut the cake. I had several other snacks that related to the books, also found on Pinterest! (See below for links I found to party & food ideas.) I had just enough for everyone. I also had some raffle prizes to give away, mostly books. Parents out their kids name into a bucket as they came into the party. Everyone who came to the party took home a Dr. Seuss themed bookmark, pencil and some stickers. They signed a big birthday card we made, which is currently hanging up in the Children’s Room. All in all, a pretty good event!

I am going to attempt to post more about my story time programs than just the craft. So here it goes….

I try to begin by saying hello, asking if there are any newbies and, if so, introduce myself and talk a little about what we do in story time. I will also talk about any special programs coming up that pertain to the 3 – 5 age group. I might take attendance, but usually there are people who walk in late, so I tend to just count people while we do the craft at the end. I also might begin with asking the kids about the theme, so I might ask them about bears, what they sound like, where they live, if they are nice, who has teddy bears at home, etc. This takes up some time because we usually get totally side-tracked with comments like “I have a teddy bear!” “I want to be a dinosaur!”  “I have a cat!” “My cat got hit by a car!” and so on.

I usually start with a song or rhyme, lately we’ve been singing Shake My Sillies Out by Raffi. They are starting to remember the song, and they love to get up and move around and get their “sillies” out before reading.

For the Teddy Bear/Bear theme, I pulled out 4 books to read: Brown Bear, Brown Bear, What Do You See? by Bill Martin Jr., Big Smelly Bear by Britta Teckentrup, Bear Snores On by Karma Wilson (LOVE Karma Wilson!), and The Bear Came Over to My House by Rick Walton. I ended up reading the first 3 books for both the Monday and Wednesday sessions, which is pretty good, since we don’t often get through 3 books! I also used my velcro story board characters for Brown Bear, which is fun because the kids get to be involved in the story by putting up a character on the board when it comes up in the story.

I had 2 songs/rhymes picked out to use: The Bear Went Over the Mountain and Teddy Bear, Teddy Bear. I didn’t end up using either since they were able to sit through the 3 books.

However, we did go on a BEAR HUNT! They loved doing this and doing all the hand motions and sound effects. Plus, it’s always to pretend you’re in a dark cave with a bear. I love Michael Rosen’s We’re Going on a Bear Hunt, but doing the Bear Hunt (chant? it’s not really a song…) is totally fun. There are a lot of different variations of this and most are online somewhere. I think I’ve actually changed my version to make it work better for my group. (At some point, I  will post it, but it’s on my work computer at the moment.)

The craft was decorating construction paper teddy bears. I had my library page pre-cut the teddy bears and then I put out different craft items to glue on or color with. It’s simple and the kids love it. The parents love it too. They came out really cute 🙂

“Back-to-School” brings up so many feelings and emotions. As September looms closer I always get a vague panicky feeling, like there’s something I’m forgetting to do. This is usually followed by some dream that I am in high school or college and I have been going to school all year only to realize that there was a class I completely forgot to go to and now it’s too late! (I honestly have some version of this dream every year!) Luckily, I do not have to go back to school, but that panicked feeling is there nonetheless.

“Back-to-School” also means Fall, for me. Even though we are technically still in Summer. This should be changed, by the way, because everyone knows that September is Fall. I have always loved this season and I was crushed when I realized that Fall doesn’t really start until around the 21st – 23rd of September, which meant that my early September “Fall” birthday was, in fact, a “Summer” birthday. This was a big part of my identity that had to be reworked. Or, as I previously suggested, it should be changed so that the 1st of the month is automatically Fall. I’m just saying…..

Also, Fall (or late Summer) also means the return of…….Pumpkin coffee!!! Yes, it’s back. And it is good. I recommend the pumpkin latte at Starbucks, or the iced pumpkin swirl at Dunkin.

In the world of Public Libraries, “Back-to-School” usually means the end of the Summer Reading Program and quiet days in the Children’s Room. This is the time when we clean up and re-organize and plan Fall and Winter programs. Or, this is what it should be for. Mostly, I don’t get as much done as I would like. I love this cozy-ish time of year, and there are some cute books for going back to school and the Fall season. The following are a few books I have used in story time and some that I just found and plan to use next week in my first story time of the season. (The last one, Audrey Penn’s The Kissing Hand, was one that my mom gave me when I went away for my freshman year of college!) 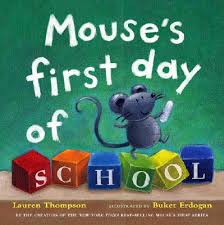 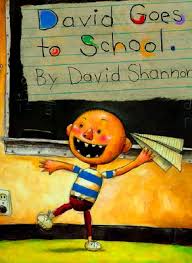