Super excited to be traveling to NYC to attend BEA (BookExpo America) bright and early Tuesday morning! Unfortunately, I will not be able to see Stephen Colbert at the Tuesday Author Breakfast (boo) but I have tickets to the Wednesday Children’s Author Breakfast (with 2 of my favorite authors: John Green and Lois Lowry!) and also to the Thursday Breakfast featuring Kirstie Alley and special appearance by Jimmy Fallon! (my secret t.v. boyfriend.)

Lots of authors I’m excited to see and LOTS of galleys I cannot wait to get my hands on! Maybe I’ll even have some to give away….perhaps. 😉 I will use some of the autographed copies for summer reading prizes for the kids and teens at the library – some I’ll keep just for me!

I’ll be going with my library director and another librarian I work with. (And contrary to popular belief, Librarians DO know how to party!)

And luckily I now have a new phone – yes, I broke down and got the iPhone 4. (Not the 4S – couldn’t quite rationalize the extra $100.00) But this phone is better than the laptop I am currently typing on so I am very happy to have it! Plus, the BEA mobile app works great on the iPhone – so excited to use it! I’ll try to post pics while I’m there using – yep! – my new phone 🙂

Just did a bit of shopping for the trip (Target & Banana Factory Store – best 2 stores around!) And thanks to my very good friend and popular author of  Shop Talk – the blog from the Eric Carle Museum of Picture Book Art I will be attending as a VIP, which I think gets me free coffee in the VIP lounge. I will definitely need it!

The Ghost of Mark Twain

In September, I posted about Banned Books Week and mentioned that our library had just this year decided to un-ban Mark Twain’s Eve’s Diary, which had been banned by a bunch of stuffy librarians with buns and glasses on chains about 100 years ago because of some inappropriate drawings (see below.) 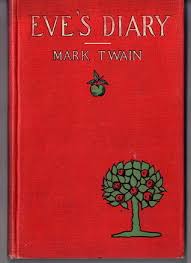 Twain even called us the “Library freaks,” which we think is the coolest thing ever!

But we wonder if Mark Twain is really done with us yet…….

Last Thursday, I was in the Children’s Room with our volunteer, Jess, and the president of the high school library Anime Club. No one else was in the room. While we were chatting, we suddenly heard a loud thud. It came from the nonfiction. When I went to investigate, I saw a book face-down on the floor directly in front of the A-D biography section. A book in the A section was sticking out slightly as if someone had pushed it from the other side of the shelf. I picked up the book and gasped (well, maybe not, but it sounds better if I say that.) The book was a biography on none other than Mark Twain himself.

Now, we alphabetize biographies by the person they are about. So my first thought was, “why would a book on Mark Twain have fallen out of the A-D section? Was Mark Twain angry that he had been misfiled? Did he jump all the way from the T – V section just to let us know he was here?? Does he not care that we un-banned his book this year because he was so annoyed when we banned it 100 years earlier???

Whatever the reason, we know that he wanted to get our attention…….

What Are We Worth?

Very interesting stats…..
Infographic: A Librarian’s Worth Around the World | Masters in Education.org